Several people attempted helping this neglected and scared dog, which was found wandering all by himself in Evans Creek National forest in Washington. None of them managed to do so, until someone posted an image of him on Facebook in order to try and locate his owners. When this one girl saw his picture, she set up her mind to save this sweet pup, and went with her friend to find him. When she got there, it took some crazy measures to get him to join them and come back home with them.

Local resident Amanda Guarascio decided she had to go on a mission to rescue a stranded mixed Pitbull lost in the woods. She made up her mind after she saw a post about him that was published on the Facebook page of WA Lost & Found Pets. She asked her friend Dylan Parkinson to join her, and they both set out to track him, get him to safety and help find him a warm new home.

When Guarascio and Parkinson first found the poor dog they were shocked to find in what an awful condition he was in. His fur was rigid and was missing many groups of hair. He was starved to the point his ribs were visible. They could tell he was also very physically weak, and he had the saddest look in his eyes. He was so scared of humans that he wouldn’t let anyone touch him or even come near him. The dog was lying down hidden exactly where the Facebook post said he would be. Guarascio and Parkinson believed they might be able to get the dog to come back with them if they’d offer him some food, but when they tried offering him a Hot Dog, the dog grabbed it from their hands and then quickly ran back to his hiding place. They realized it wasn’t going to be as easy as they first thought.

After many attempts to get closer to the dog and maybe manage to grab him, they were getting tired and hopeless. The sun was starting to set and it was getting darker and darker. The park’s closing hour has arrived. Even after this long day, the two knew that they can’t give up on their duty. They decided they would come back to tomorrow with new forces to finish what they’ve started.

Next morning the two returned to park and they’ve brought with them yummy treats and sausages to offer their buddy. As they were searching the park to find him, a group of travelers they met on the road told them they’ve been occasionally feeding the dog whenever they ran into him. Guarascio and Parkinson understood that the traveler’s help probably helped keep the dog from starvation so far, but that it won’t be enough for much longer if they don’t promise he’ll get some medical attention.

Giving him food and treats allowed Guarascio to come near the dog for only a minute or two every time, before he would run away again. She knew that it wasn’t gonna be enough if she wanted to save him from dying. She would have to do something that will really earn his trust, so he’ll allow them to remove him from the park and get him somewhere where he could start his healing process.

Guarascio decided she was going to try a method that many animal lovers are familiar with. Lots of animals that suffered from neglect or abuse have a hard time trusting humans, no matter how gentle or calm they would treat them back. In many cases, the only way to get them to stop fearing you, is to show them you’re vulnerable or wounded yourself, and that you’re incapable of hurting them in any way. She thought it wouldn’t hurt to give it shot. Giving it a try

At first it didn’t seem like it had any effect on the dog. Guarascio laid on the ground in a fetal position next to him, measuring the dog’s impression of what she was doing and trying to understand whether it was working or not. “He growled a little bit but eventually got close enough to smell me.” Guarascio said. “I laid in the road for about 20 minutes before he lost interest and wandered off,” she added. After the long wait, the efforts finally seemed to be paying off for a moment. The dog started getting closer to Guarascio, sniffing and investigating around her. Slowly trying to close the distance with the dog, she carefully moved her body towards him, inch after inch. But when the dog realized she was trying to get closer to him, he panicked and quickly retreated to his hiding place and curled up into himself. It took one more hour for her to win his trust completely. Taking two steps closer and then one step back each time, she managed to finally get right up next to him. “He growled a little bit, so I started whimpering and yawning, which is a calming signal, and continued to slowly get closer and closer.” At last, she did it! He allowed her to pet him and feed him food of her hand. Although it might seem like a radical move, Guarascio knew it would work. She only needed to proved to the dog that she was no threat to him. Making herself seem vulnerable and in danger helped trigger the dog’s impulse to protect. He wanted to help the wounded girl which was lying next to him, and he finally understood she was not going to hurt him if he would get close in any way.

Guarascio’s new friend needed a new name. During the attempts to win his trust, she was thinking about calling him Bear. After just sitting next to him for a few minutes to allow him to calm down completely, she managed to put a leash on his neck and walk him back to the parking lot. It was already 9 p.m when they both got back to the truck where her friend Parkinson was waiting.

Visit to the vet

Immediately after that, the courageous couple took Bear to see a vet and to get him urgent medical treatment. His weight was only 57 pounds when they first weighed him, and the vet said he had multiple infections on his skin and in his ears. No one knew if Bear had any previous owners, and if so if these owners would even want to reclaim him. The two decided to put him in a local animal shelter for some time, to allow a chance for someone to come and return him to his original home.

Waiting at the shelter

It’s been a week, and another week, and then a month, but still no one came to get Bear. It appeared his previous owners had no interest in him and didn’t want anything to do with him. During his days in the shelter Bear was getting stronger and gained back most of the weight he lost, but even after all this, the dog still seemed to be sad and unhappy, probably because he was spending most of his day alone in his cell.

No one could tell anything about the starved wandering dog found in the woods. It remained a mystery since no one showed up to get Bear from the shelter or to point out where his owners were. There was no way of knowing where did he come from and what he might have been through before he was found and rescued by Guarascio and Parkinson. His frightened behavior and mistrust in humans suggested that he wasn’t very wanted and probably abused.

Eventually came good news! Bear’s healing process was reaching it’s end, and he was gaining more strength and energy with every day that passed in the shelter. He gained 5 more pounds, and finally the employees of the shelter managed to find him a foster family. They agreed to temporarily take him in, until a permanent owner could be found. It was the warm home he deserved and the loving company he needed.

In his new home, Bear was sharing a yard with some other rescued dogs that his foster family took in and was taking care of. Being around other pawed friends like himself had an immediate positive effect of Bear’s behavior. His social skills were all improving miraculously and he was soon running around and playing and goofing around, just like normal, happy and healthy dogs do. His trust in humans was restored, and he just couldn’t get enough of his owners’ petting and grooming.

The makeover is complete

Bear’s makeover was truly unbelievable. He was a changed man! His appearance was now completely different from the first time he was found in the forest. All his fur had grown back, and became thick and shiny. He got in great shape, and you can even tell he’s smiling in some of these photos. His new family started teaching him simple commands, and he gives them much love in return for theirs.

Bear’s story made it to the news – and he became a local celebrity! After one family watched his story, they were deeply touched by his sad history, and they’ve decided they want to make Bear their new family member. They requested to bring Bear into their house, so he could finally get stable long-term support. They went to pick him up from his foster parents, and introduced him to his brand new home. 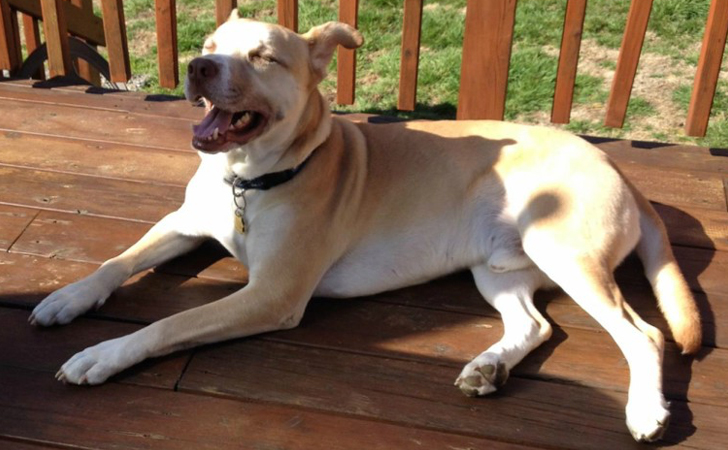 Summing up the journey

It’s just so moving to think of the long way this sweet pup has been through. That’s what he looks like today, and it’s all thanks to Amanda Guarascio, who has given him a second chance. If it wasn’t for her rescue mission, he would have never had a shot at becoming the friendly and playful dog he’s now. He’s new family tells that he likes nothing more than chilling on their couch and dreaming of all the yummy treats he can now have.

His new owners cannot be more happy about their new furry friend. “We cannot begin to express our profound thanks to Amanda and Dylan for not only what they did, but for bringing this incredibly beautiful animal into our lives,” they said, “Bear has been an incredible addition to the family”. In the future, if you ever come across a frightened abandoned animal, always keep in mind how important it is to prove him you have no intention to hurt him. It really can make an amazing difference.

Have you ever heard of people who don’t eat or drink?

Everyone, whether or not they have allergies or are on a diet, loves to eat. It’s a universal ...

We all tend to underestimate the winter sun and take its effects lightly. We think that it is ...

Which pet should you adopt?

A pet is for life, not just a gift. Choosing a four-legged friend to join your family can be a ...