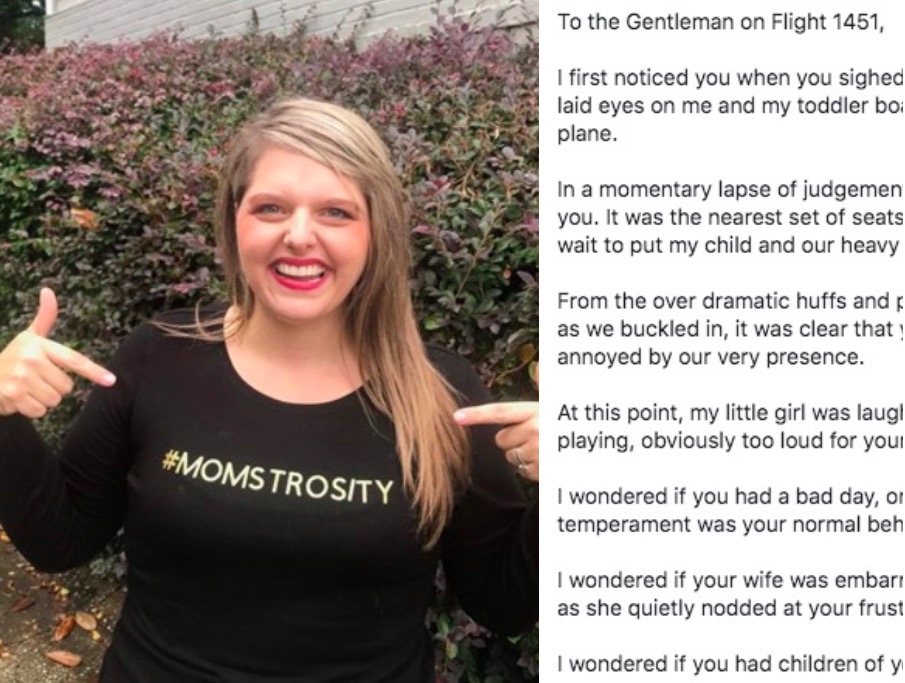 There comes a time in most young parents lives when they will have to take their baby on a plane. Anyone who has ever flown with an infant or child can likely tell you that it is not easy. So much worrying goes through the parents’ minds: Will my baby be safe? What if their ears hurt? Will they be able to sleep? And of course… what if they cry the entire flight and upset all the nearby passengers on the plane?

Of course, flying with kids can be a challenge, but it is especially difficult if you are doing it alone. When a mother from Georgia flew for the first time without her husband with her toddler daughter on a cross-country trip – she came prepared. She brought everything she could think of to keep her little one content during the flight, but unfortunately, after the plane took off her overtired daughter began to cry uncontrollably. Although she tried everything in her power to get her to calm down, an angry passenger’s ‘loud sighs’ and ‘huffs and puffs’ only made the situation worse.

Flying with a toddler

In early February 2019, 33-year-old mother-of-five from Georgia, Stephanie Hollifield, was travelling with her two-year-old daughter, Haley, on a cross-country flight. Any parent who has every flown with a young child knows how challenging the situation can be.

Not only is the mom or dad likely worried about their little ones being as comfortable, safe, healthy, and entertained as possible – but many also get stressed that their kid will throw a tantrum, cry, scream, and upset other travelers. So naturally, when preparing for her trip with her toddler, Hollifield – who also works as a parenting blogger – made sure to bring along plenty of toys, games, and snacks in order to keep Haley happy.

Despite the mother’s efforts to keep her daughter as calm and content as possible, as the plane began to take off, Hollifield’s daughter started to get fussy, crying and eventually getting into a “screaming tantrum.” Hollifield nervously tried to relax her child, but as she did, she couldn’t help but notice a male passenger sitting in front of her who was “sighing loudly” and making “overdramatic huffs and puffs.”

The passenger’s obvious annoyance at her and her daughter’s outburst only made the mother more anxious, and no matter what she tried to do – she just couldn’t get her overtired daughter to calm down. For the rest of the flight, as Hollifield did her best to ease her little girl’s nerves, she felt the disapproving glares and heard the angry mutters from the fellow traveller.

After what felt like an endless flight, Hollifield’s plane finally landed and she got home safely with Haley. However, she still couldn’t stop thinking about the passenger who had been rude to her and her daughter. So, seeing that writing about parenting is her profession and all, she decided to jot down her experience, and share it on the Facebook page for her and her friend Eliza Morrill’s blog, Momstrosity.

Although she had hoped that her story would reach many online users – hopefully even shedding light on a situation that happens all too often – she had no idea just how many people were going to see her post, and how viral it would quickly become.

In the post, the mother wrote a public letter to the “Gentleman on Flight 1451.” She began the letter by admitting that she noticed the passenger’s displeasure with her and her child before they even sat down in their seats. She wrote, “I first noticed you when you sighed loudly as you laid eyes on me and my toddler boarding the plane.”

She continued, “In a momentary lapse of judgement, we sat behind you. It was the nearest set of seats, and I couldn’t wait to put my child and our heavy bags down.” Hollifield then wrote that after hearing the stranger loudly grumble and sigh it had become “clear” that he was “annoyed” by their “very presence.”

However, as Hollifield explained in the letter, her daughter wasn’t even crying or throwing a temper tantrum at this point. She was just being an adorable, silly, happy toddler. “At this point, my little girl was laughing and playing, obviously too loud for your liking,” she wrote. “I wondered if you had a bad day, or if this grouchy temperament was your normal behavior.”

The mother explained how the passenger was sitting next to his wife, and she speculated that his spouse was “embarrassed” as she “quietly nodded” at his “frustrations.” Then, Hollifield asked a question she felt she already knew the answer to, “I wondered if you had children of your own,” the mother wrote.

In the post, Hollifield then admitted about just how much preparation she had put into this single flight. She wrote, “For weeks, I researched tips for flying with kids. I packed toys and games and books and downloaded movies.”

She even confessed to “dosing” her daughter with Benadryl in hopes of it relaxing her and helping her sleep, but Haley still “only slept 20 minutes” on the entire flight across the country. Unfortunately, despite all of her preparation and attempts at keeping her toddler relaxed, the flight didn’t go as smoothly as she had hoped.

Hollifield continued to tell the unknown traveller in her letter about everything that she had tried to do to make sure that her daughter Haley stayed quiet and didn’t disturb him. 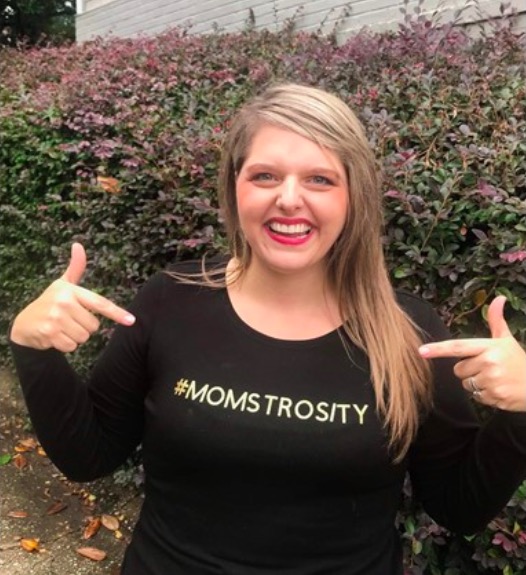 She said, “I did everything in my power to keep her calm and quiet. I shushed her, and I made sure her little feet didn’t kick your seat. However, she explained, as the plane took off, “the kicking and the screaming tantrums came on fast.”

The mother then revealed to the passenger, as well as those reading the letter, about everything that was really going on with her toddler, which likely explained why she was acting the way she was. She wrote that prior to the flight, Haley “had been up since early morning” and that she “hadn’t had a nap” and “hadn’t eaten much.”

To make things worse, her daughter had been ill, and was still “recovering from a sinus infection.” The worried mother explained, “I wondered if the pressure from the altitude hurt her ears.”

Hollifield admitted that she knew her “exhausted and fussy” daughter was bothering those around her on the plane. Naturally, she started to feel bad for the people sitting close to her and Haley. She said how she had “apologized to everyone” around her, and even said, “I almost started crying myself.” 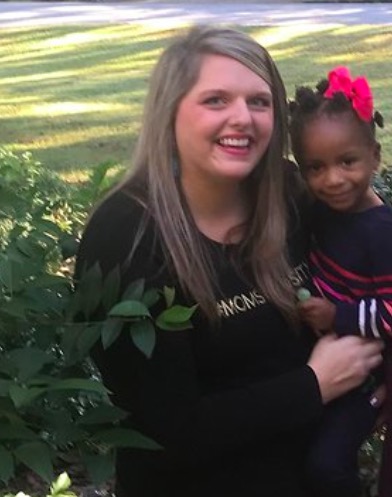 At this point, Hollifield was feeling something that nearly every parent stuck with a crying or screaming kid in a public place feels – guilt. She confessed, “I was feeling shame and guilt for not being able to control my own child.”

Just when the mother was starting to feel great distress, an “angel” flight attendant came to her rescue. The patient airline employee, she explained, had gently approached her daughter, and handed her a plastic cup and straw to play with. The attendant had told them, “It’s okay! Flying is tough on everyone, and you are both doing great!”

And just like that, Haley stopped crying. Hollifield wrote, “Somehow, her kindness calmed my baby. Somehow, her simple words made me feel better.” It was then that she said she realized, “The problem wasn’t with us, it was with you.”

Nearing the end of her letter to the unknown passenger, the mother took the opportunity to tell the man just how special, and important children are. “While children can be terribly inconvenient now,” she said, “they will run the world when you are old and grey.” 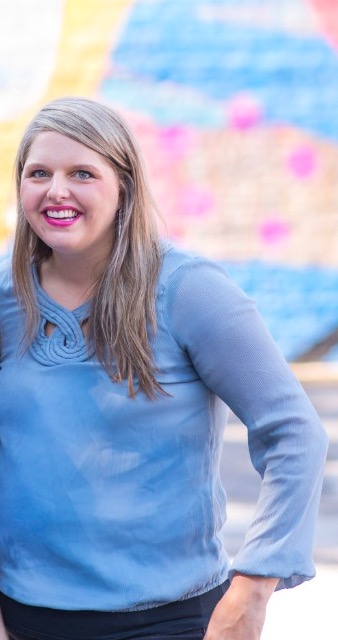 She wrote, “Kids can be annoying and downright obnoxious, but they are also innovative and brilliant.” She added, “These kids might one day discover the cure for the type of cancer that runs in your family.”

Hollifield elegantly wrote about no matter how “selfish” and “loud” children can be at time, that they “can also be precious and loving” and “might grow up to build systems and make laws that benefit us all.”

She said, “They may grow up to serve others in a way that makes us wish we could go back in time and do it all over again.” Hollifield summed it up for the rude traveller, “They are the future.”

The mommy blogger then wrote in her letter about just how far a “kind word” or a “plastic cup and conversation from a new friend” can go. Hollifield, who understands that not everyone is a ‘kid-person,’ offered words of advice to the ill-tempered passenger, “If you can’t muster up a smile and a hello, then simple silence will do just fine.”

She told the man that the next time he has to sit near a young child on a plane, she hopes “that instead of frustration and annoyance” he will feel “hope and goodness.”

Hollifield ended her letter to the mystery traveller with an incredibly thought-provoking and hopeful message, “This world certainly has enough negativity without us adding to it, and just maybe the kindness you give out today, will be returned to you in the future.”

Although it is not definite that the man will ever read the post directed to him, it certainly touched and inspired thousands of other people throughout the world wide web.

In just a matter of hours, Hollifield’s post on Momstrosity blew up with thousands of reactions, shares, and comments. Over two thousand people on Facebook commented on the letter, praising the mother for opening up about a situation that many parents know all too well.

Many moms, and dads, wrote about how much they could relate to Hollifield’s story. Even those who don’t have children replied, one commenter wrote, “I am flying today and I’m going to make a point to find a momma traveling with kids and tell her she’s doing a great job!”

Not the first time

Surprisingly, this isn’t the first time Hollifield has gone viral. The mother and her daughter became internet famous back in November, 2018 after she had written a Facebook post asking for someone to help take care of her daughter’s hair.

The mom had written, “This clueless white momma is humbly coming to you to ask your help with Haley’s hair.” Fellow Georgia resident and mother-of-three, Monica Hunter, came to the rescue and their story quickly went on to capture the hearts of people all over the world.

As parents to five children, two of which are adopted, Hollifield and her husband AJ are used to receiving “a lot of looks” from strangers. As she explained in her blog, “We are loud, we don’t all look alike, and usually at least one of us is expressing a big emotion at any given time. It’s natural to be curious.”

Great things to do on your day off

Ah, so you’ve got the day off of work or school, and you’re looking for the perfect way to pass the ...

The four chords that most songs are composed of

There’s nothing we love more than driving home from work and shoving on the radio, rolling down the ...

Awesome gifts to give someone who is leaving to another country

We all love giving gifts. There’s something about finding the perfect present for the perfect ...